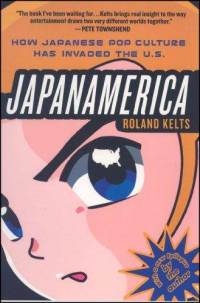 I remember when I was young and folks my grandparents’ age said they’d never buy a Japanese car because of Pearl Harbor.

That’s a big story. But, in the long run, it isn’t the big story as far as relations between East and West are concerned. When it comes to lasting impact, anime trumps automobiles.

I’m using anime — Japanese cartoons — as an example. It was only the beginning of Japan’s cultural invasion of America.

Consider the recent TV commercial for Nintendo’s Wii game system. In it, two Japanese men drive up to a typical American home and ask if they can play, too. The ad’s soundtrack, by the Yoshida Brothers, is American trip-hop with traditional Japanese instruments — shamisen, or three-stringed Japanese lutes.

This commercial tells us two things.

First, it says that Japanese companies have come a long way since the days when they downplayed their origins. Now, Japanese pop culture is cool, and companies like Nintendo exploit that.

Second, it says influence goes both ways. The Japanese culture we’re getting in the U.S. has been subtlety Americanized, like the Yoshida Brothers’ jazz- and dance-flavored music.

This cultural give-and-take between America and Japan has been obvious for a decade. But it’s only now getting attention outside academia and a growing number of young people obsessed with anime and manga (Japanese animated films and comic books).

Roland Kelts’ recent book, “Japanamerica: How Japanese Pop Culture Has Invaded the U.S.” is one of the few books aimed primarily at a general audience to get it right. Kelts sees that it’s a two-way street.

Until recently, Western culture poured into Japan while little Japanese culture leaked out. In the 1850s, Commodore Matthew Perry forced the U.S. into Japan at gunpoint. Nearly a century later, Japan underwent a second round of U.S.-led Westernization as it recovered from World War II.

Then, in the 1950s and ’60s, a young Japanese cartoonist named Osamu Tezuka, who’d fallen in love with Disney cartoons, invented the distinctive style most Americans now envision when they think of anime — big eyes, small noses and spiked hair, all of which comes from Tezuka’s reworking of the Disney style.

When anime exploded onto American TV in the 1990s, after years of false starts, it was so exotic that entranced children scarcely noticed the hints of its American origins. Americans will probably never embrace purely Japanese artistic institutions like Noh theater. But Japanese culture tinged with Western influence is a different story.

Americans invented the comic book. But the Japanese turned it into a mass medium, enjoyed by people of all ages and backgrounds. Now, in America, where readership of traditional superhero comics is a fraction of what it once was, readership of translated manga is one of the few growth categories in all of publishing.

And the next round is already under way. American cartoons like “Teen Titans” and “The Powerpuff Girls” and American films like “Kill Bill” and “The Matrix” can’t hide the influence of Japanese pop culture.

In the early 21st century, the ages-old suspicions East and West have harbored for each other are giving way to a cycle of cultural cross-pollination that shows no sign of ending.
Posted by Franklin at 12:00 AM