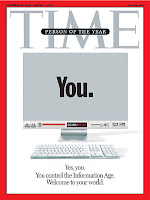 Many in both the "establishment media" and the blogs greeted Time magazine's choice last month of "You" as Person of the Year with jeers and sneers.

Was Time, itself a charter member of the Media Establishment, pandering to its readers? Did Time's editors really think "You" deserving over, say, President Bush, Barak Obama or those nuts in Iran and North Korea? Were Time's editors, like some fortysomething father of three, trying, pathetically, to be hip? What gives?

Then, a few days later, what passes for the Iraqi government hanged Saddam Hussein, making him not only an ex-dictator, but an ex-Saddam. And soon afterward, low-resolution footage of the whole affair — stop, drop and snap, taken with a camera phone — debuted on the wildly popular Web site YouTube.com. By now, it's probably the most-watched snuff film since JFK rode past the grassy knoll.

For once, Time magazine was right. You are the person of 2006.

Saddam's execution was meant to be shrouded in secrecy. But because of the Internet, now everyone can judge for themselves whether it was just or simply revenge for Saddam's decades of oppression. What I think doesn't matter. Thanks to YouTube, you can draw your own conclusion.

This is the breakthrough of the Internet. Until recently, the Internet was much like every other medium that had dominated before it. Like print, radio and television, it was largely one way — people in power talking to you. Now, with the rise of easy-to-use Web sites like Blogger, LiveJournal, MySpace and YouTube, which debuted in 2005, the Internet truly runs in both directions. You can talk back.

You no longer have to know the first thing about computer programming to have your own Web site, filled with your own thoughts, opinions, photographs and videos. Now, there is no gatekeeper, no middleman preventing you from finding an audience. While the big music and movie companies whine about diminishing profits and illegal downloads, amateur bands and filmmakers are posting their own material on MySpace and gaining a following.

The leak of the Saddam video proves that "You" — that is, anyone — can drive a story. But it's not such huge, headline-grabbing stories that, in the end, really matter. No, what matters are the millions of small stories being told by millions of people who now have a way to talk to the entire world.

Compared to biological evolution, cultural evolution occurs in the blink of an eye. Now it will occur even more rapidly. As the average person produces more and more content for the Internet, more and more ideas are subject to its great, electronic feedback loop, which weeds through them like the cyberspace equivalent of natural selection. Charles Darwin meets Bill Gates.

Post a video to YouTube, and viewers can rate it. Write a blog, and you live or die by the number of other sites that link to you. It's the same power Roman emperors wielded in the Coliseum, only dispersed among billions of thumbs and only metaphorically fatal.

Of course, there is still a place for one-way media. We all spend more time consuming content than creating it. But the ratio of consumption to creation is no longer as lopsided as it was.

There is a lot more creativity out there than before. And You are responsible.
Posted by Franklin at 12:00 AM