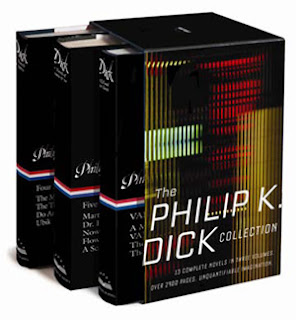 There are snooty critics who see it symptomatic of civilization's decline. But the American literary canon is finally expanding to encompass some of our most influential, yet neglected, writers.

"Philip K. Dick: Four Novels of the 1960s" is scheduled for publication in June. It will include the novels "The Man in the High Castle," "The Three Stigmata of Palmer Eldritch," "Ubik" and "Do Androids Dream of Electric Sheep?" The last of those was made into the 1982 Harrison Ford movie "Blade Runner."

Jonathan Lethem is editing the volume. Lethem, author of "Motherless Brooklyn" and "The Fortress of Solitude," is considered a "literary" author, although he actually has written quite a bit of genre fiction, including the futuristic "Gun, with Occasional Music." But although Lethem sometimes writes science fiction, his books aren't marketed as science fiction. He isn't confined to the ghetto as was Dick, who died in 1982.

And he's happy to do his part to assist Dick's escape. In an interview with the blog The Elegant Variation, Lethem said, "I'm helping preside over the utter and irreversible canonization of one of my (formerly outsider) heroes ..."

But Dick's ascendance to the literati firmament wouldn't mean much if it were merely an isolated incident. It isn't.

Last year, the Library of America elevated an even more unfairly maligned and neglected figure of genre fiction: H.P. Lovecraft. And it was the positive response to "Lovecraft: Tales" that helped spawn the Dick collection, according Max Rudin, Library of America publisher, in an interview with the AP.

Lovecraft is America's most important horror writer since Edgar Allan Poe, although, like Poe, he seems to have earned greater respect in France, for whatever reason.

The works of science fiction/fantasy writers Ray Bradbury and Ursula K. Le Guin could be the subject of future L of A volumes, Rudin said.

Genre writers are at last getting their due, just three years after the National Book Foundation controversially gave Stephen King its Distinguished Contribution to American Letters Award and sent the snobs into apoplectic fits.

"But giving an award like this to a guy like me suggests that in the future things don't have to be the way they've always been. Bridges can be built between the so-called popular fiction and the so-called literary fiction," King said in his acceptance speech.

It's a two-way street. When Philip Roth, an undeniable member of the Literary Establishment, delves into science fiction with an alternate history novel like "The Plot Against America," it becomes far harder for critics to ignore those who've plowed the fields of SF for decades. Then the critics might learn that Roth's plot is such a cliche in SF circles that even most hacks wouldn't touch it without giving it some new twist.

If mainstream critics are forced to read unapologetic science fiction, horror and fantasy, there's no telling who will be admitted to the canon of respectable literature next. I suggest Harlan Ellison.
Posted by Franklin at 2:00 AM