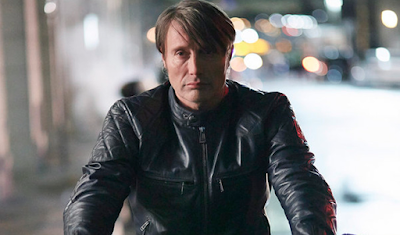 NBC’s “Hannibal” is many things: a horror story, a police procedural, a dark comedy, even a cooking show — albeit a cooking show where sometimes the main ingredient puts up a fight.

I, for one, approve of the entrée getting a fighting chance. That’s something we couch potato foodies haven’t seen since Food Network stopped showing reruns of the original — and vastly superior — Japanese version of “Iron Chef.”

Who, having seen it, can forget Iron Chef Hiroyuki Sakai’s battle to the death with an octopus?   There is something primal about a chef literally wrestling with his main course and, in the end, producing a dish that looks, as the cliché goes, too good to eat. Sakai, nicknamed “the Delacroix of French Cuisine,” after the French painter, often produced just such dishes.

So does Dr. Hannibal Lecter, portrayed with sinister serenity by Mads Mikkelsen (“Casino Royale”). Maybe there is a warning in that. On “Hannibal,” you never know whom you might be having for dinner. Then again, when has “looks too good to eat” ever stopped anyone?

The best — and best looking — show on television opens its third season with Hannibal and his former therapist and colleague (now accomplice?) Bedelia Du Maurier (Gillian Anderson) having escaped to Europe and assumed new identities.

When last we saw FBI profiler Will Graham (Hugh Dancy), his boss Jack Crawford (Laurence Fishburne) and Dr. Alana Bloom (Caroline Dhavernas), Hannibal had left them all for dead, and the first episode keeps their fates simmering in suspense. Showrunner Bryan Fuller has elected instead for a palate cleanser, setting up Hannibal and Bedelia’s new status quo.

With the change of setting, “Hannibal” becomes something new, too. Now it’s a fairy tale, in addition to everything else it is. Eddie Izzard’s wonderfully batty Dr. Abel Gideon, whom Hannibal ate last season, one severed limb at a time, tells Hannibal as much during a flashback.

“Let it be a fairy tale,” Hannibal replies as he pulls back a curtain to rejoin the story in the present, where the fairy tale is a grim twist on “Beauty and the Beast.”

After a brief sojourn in Paris, Hannibal and Bedelia land in Florence, Italy, where Hannibal assumes the identity of a Dr. Fell, as well the late doctor’s position as a resident scholar of Renaissance Italy.

But Hannibal is becoming restless and Bedelia increasingly apprehensive. Hannibal has barely killed anyone since arriving in Florence, but clearly that is about to change. One of his jealous colleagues is practically begging for a dinner invitation. Hannibal now kills for aesthetic reasons.

As Bedelia, Anderson is doing her best work to date, and her elevation to series regular — at least as long as her character survives — makes a great show even greater. As for Mikkelsen, he is simply the definitive Hannibal Lecter, which is the highest praise I can summon.

Fuller’s breaking of the fourth wall with Hannibal’s curtain reveal shows he is confident and fully in control of his story. It also shows him playing with themes that run through Thomas Harris’ Lecter novels. The idea of becoming something else is central to both “The Silence of the Lambs” and “Red Dragon.” As “Hannibal” the series reenacts “Hannibal” the novel, in all of its over-the-top, Grand Guignol glee, some sort of transformation is inevitable.

In Florence, everything is bright and colorful. The show reserves the clinical, desaturated look — so prevalent at times in the previous seasons — for the flashbacks. Fuller is painting in broader strokes.

Thanks to the quirks of intellectual property, “Hannibal’s” producers have the rights to all of the Lecter novels except “The Silence of the Lambs.” That means no Clarice Starling. Fuller has adapted by moving up the Italy story line and creating characters to fill the Clarice-shaped voids. Anna Chlumsky’s Miriam Lass is Clarice as trainee. Bedelia is Clarice at the end of “Hannibal” the novel. Fans dissatisfied by where Harris left things are finally getting a resolution, of sorts.

So far, it has all come together beautifully. That almost qualifies as a fairy tale ending.
Posted by Franklin at 12:00 AM