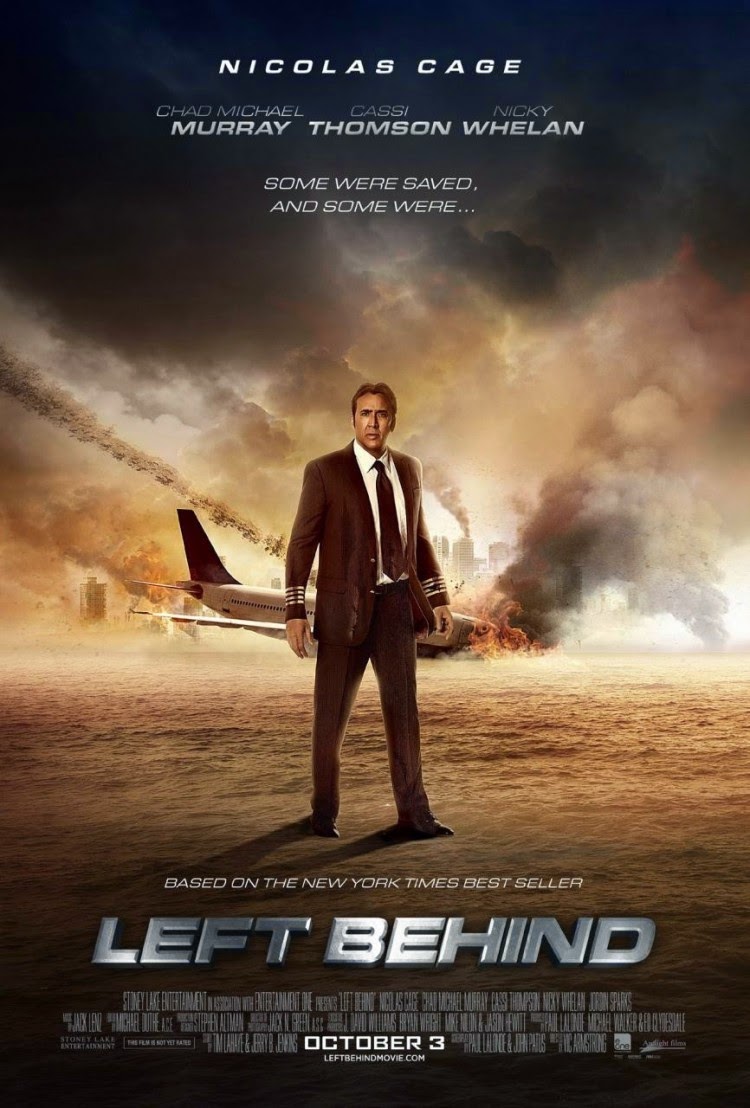 In and out of theaters in the twinkling of an eye, Cage's end times snoozer "Left Behind" has landed on DVD at a rental kiosk near your, where it sits side-by-side with the Syfy original movies it resembles.

Based on the first volume of Tim LaHaye and Jerry B. Jenkins' best-selling "Left Behind" series, the movie follows those "left behind" after the rapture of the Christian faithful to heaven, in accordance with premillennialist interpretations of the Bible. As such, it's one of many recent low-budget movies aimed primarily at an evangelical Christian audience. But Cage's participation sets this one apart. Despite a recent string of bad movies, Cage still qualifies as A-list talent, which makes his name above the "Left Behind" title a novelty, to say the least.

It's certainly a step up in star power from the first time someone adapted "Left Behind" for the screen, the 2000 version starring former child actor and would-be Christmas savior Kirk Cameron.

Yet novelty aside, Cage brings nothing to the screen that can salvage this "Left Behind." As Christian outreach, it's tepid at best, falling back on canned platitudes about why God allows bad things to happen to good people. And as an apocalyptic thriller, it's light on both apocalypse and thrills.

Even viewers looking for unintentional camp value will be sorely disappointed. For once, Cage's performance is restrained. His histrionics, which enliven such dire fare as "Ghost Rider" and "The Wicker Man," are nowhere to be found. Cage says he made "Left Behind" in part at the behest of his brother, pastor and radio disc jockey Marc Coppola. But in playing the role of commercial pilot Rayford Steele straight, Cage may have succeeded in pleasing only his brother.

One problem with "Left Behind" is screenwriters/producers Paul Lalonde and John Patus think too small.

Say what you will about LaHaye and Jenkins' book, one thing it has is an epic scope. Owing both to budget and time constraints, the movie limits its action mostly to Steele's airplane, which is in midair halfway across the Atlantic when millions of people — including the copilot and several passengers — disappear from the face of the Earth. When we're not with Rayford and his troubled jetliner, the action shifts to his daughter (Cassi Thomson) back on the ground, where she dodges falling planes and driverless cars. For most of the film, she's the "Left Behind" version of Kim Bauer.

As Rayford's devout wife Irene, Lea Thompson ("Back to the Future") vanishes after just a couple of scenes, making her one of the lucky ones. Stuck with Cage is Chad Michael Murray ("One Tree Hill") as unfortunately-named cable news reporter Buck Williams.

Missing from the film is everything that distinguishes premillennialist sci-fi, such as the previous "Left Behind" and "The Omega Code," from run-of-the-mill disaster movies. There's no hint here of LaHaye and Jenkins' antichrist figure, Nicolae Carpathia.

Also missing is any sense of internal logic. After the rapture, Rayford is unable to make radio contact with the outside world, as if everyone with a radio were among the spirited away.

What remains is a bargain-basement "Airport" knockoff, shellacked with a coat of premillennialist theology so thin no one even uses the term "rapture." The target audience must have sensed the watered-down message and stayed away from the theatrical run in droves. "Left Behind" grossed just $19.7 million worldwide, while another preaching-to-the-choir movie from the same distributor, "God's Not Dead," did $60 million in domestic business alone.

For everyone else, "Left Behind" is weak tea even when compared to other end times movies, never mind when compared to secular disaster flicks. Its characters exist in a world of PG-13 explosions and G-rated language. Worst of all, "Left Behind" is the one thing you'd least expect of a Nicolas Cage movie about the end of days: It's just plain boring.
Posted by Franklin at 12:00 AM