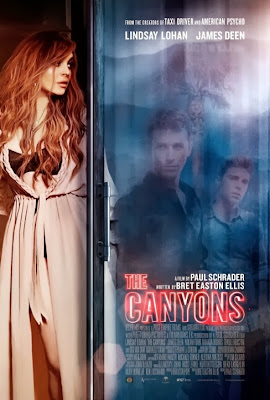 With "The Canyons," director Paul Schrader has concocted a fable about the death of film, and given audiences reason to wonder if it isn't so much a death as a mercy killing.

But the death rattle you hear isn't cinema's. It's the last gasp of Lindsay Lohan's career. The once-talented starlet both stars in "The Canyons" and claims a co-producer credit. Despite her diva-ish refusal to promote it, Lohan owns this car crash.

Now that it's on DVD and Blu-ray, and playing at a Redbox near you, we can all have a gawk.

The opening and closing credits play over images of abandoned movie theaters, wastelands of the multiplex's heyday. It's nostalgia for something that, during its time, old fogies thought was a symbol of decline from an earlier heyday, the heyday of art deco movie palaces.

Now Schrader is the old fogey, shaking his fist at a Hollywood that has not only abandoned godlike studio moguls such as Jack Warner and Louis B. Mayer, but the young rebels of the early '70s, too. In the Hollywood of "The Canyons," making movies is the pastime of oversexed dilettantes.

Christian, played by adult-film star James Deen, wears his trust fund entitlement like an Armani suit. Producing movies is something he does to relieve the boredom, and so he produces the sort of movie that makes money nowadays: a brainless horror flick. When he isn't doing that, he makes cellphone movies of his girlfriend, Tara (Lohan), having sex with other men, and other women.

This is what making movies has become: spectacle for teenagers and the Internet. "The Canyons" couldn't be more obvious if it showed us a studio boss addicted to cat videos. For Schrader, who long ago wrote the screenplays for "Raging Bull" and "Taxi Driver" and directed an underrated remake of "Cat People," this Newest Hollywood has become the kind of cesspit that unhinges the Travis Bickles of the old New Hollywood.

Aging enfant terrible Bret Easton Ellis ("American Psycho"), who wrote the screenplay, seems to be in self-parody mode, although you wonder if he is in on the joke. Schrader certainly isn't. Nor is the cast, who recite their dialogue as if through a Xanax haze.

It's all so tedious you might doze off and miss the plot, which involves Christian going about his spoiled-brat ways and mid-afternoon quickies while obsessing over Tara's possible infidelity.

As it happens, Tara did have a fling with wannabe actor Ryan (Nolan Funk), who is now the lead in Christian's horror flick, thanks to her recommendation. Now Ryan wants to rekindle their romance, but Tara is conflicted, having grown a bit high-maintenance as Christian's kept woman.

"The Canyons" eventually unravels into jealousy, accusations, blackmail and murder, all of which is set dressing for the film's central sex scene, a four-way that would have been transgressive 20 years ago, but comes across as a plea for attention now. "The Canyons" is like a middle child pooping his pants to get noticed when he thinks Mommy and Daddy are doting too much on the new baby.

No one acquits themselves well. Ellis seems to be cribbing from his previous work, including a murder scene that will have you thinking of Patrick Bateman. Schrader's direction is perfunctory. And Deen isn't up to the challenge of playing a sociopath, coming off as wooden when he should be steely.

But it's Lohan, diminished by her own excesses, who emerges worst for wear. Still in her 20s, she looks in her 30s, and her performance, while varying in volume, is constant in its indifference. Hidden behind a plaster of mascara, she looks like she might have stumbled in from the set of a John Waters film.

If only she had. With his gift for kitsch and camp, Waters might have made something out of "The Canyons." Instead, all we have is a scorned filmmaker's Dear John letter to Tinseltown.
Posted by Franklin at 12:18 AM