If I wanted to review "The Raid: Redemption" in one sentence, I could do no better than quote George Orwell: "Imagine a boot stamping on a human face — forever." 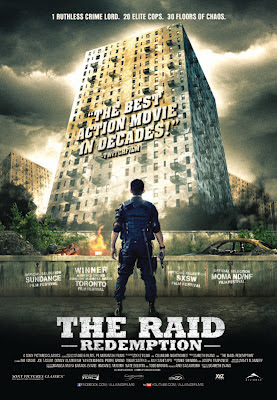 Even the most avid fans of martial arts films may find this one to be too much of a good thing.

An Indonesian film written and directed by a Welshman, Gareth Evans, "The Raid: Redemption" has a pedigree that seems tailor made for the exploitation-flick connoisseur. But beyond that, it delivers just what its intended audience expects, with all the authority and repetition of a jackhammer.

The English-language title — colon and all — sounds more like the name of a video game than of a movie, although that's a bit unfair because the average 21st century video game has a more robust plot. Storywise, "The Raid" is more like Donkey Kong in terms of complexity. The good guys, a police tactical unit, must raid an apartment building and fight their way to the top floor, past an army of goons, to apprehend a crime boss named Tama (Ray Sahetapy).

However, things quickly go south, and the police find themselves trapped inside the building with no support, no way to contact backup and surrounded by a building full of hostile tenants who are more loyal to Tama and his money than to the law.

As attrition takes its bloody toll, it falls to one officer, Rama — Iko Uwais, who also served as fight choreographer — to get out with as many of his fellow officers alive as he can, while also completing the mission.

If brutal, bone-cracking, acrobatic martial arts fights are your thing, "The Raid" — new to DVD and Blu-ray — doesn't disappoint. It's amazing the actors didn't come out of principal photography maimed or worse. I felt a little roughed up just from watching them in action.

Apart from Uwais, we see stunning work from Joe Taslim as Jaka, one of Rama's fellow policemen, and from Doni Alamsyah and Yayan Ruhian as Tama's top two henchmen, Andi and Mad Dog.

While the backstory dribbled out does add some welcome complications — corrupt cops, family secrets, etc. — "The Raid" is mostly about the raid. It's as close to the Platonic ideal of an action movie as you can get, a pure action movie, with almost nothing to distract you from the fisticuffs at hand.

Now I've seen and loved lots of martial arts movies in my time. From the Shaw Brothers and "The Streetfighter" (Sonny Chiba, not Jean-Claude Van Damme) to Jackie Chan and Jet Li to Bruce Lee and "Ong-Bak," but I've never seen anything that looked quite as painful as the fight scenes in "The Raid." Not even Chan's blooper reels.

The fights, while brutal, do sometimes achieve a kind of fluid beauty. But as each scene piles on another, it gets to be too much, an extra slice of cheesecake that doesn't seem as good an idea after the fact as it did before. And the sometimes antiseptic cinematography, reminiscent of a "CSI" autopsy, doesn't help.

There are martial arts fans who like their martial arts stars to be real martial artists, like Bruce Lee or Uwais. But I've always preferred the Peking Opera-style of theatricality that people like Chan bring to the screen. It's more dancing than fighting, but it's more fun to watch.

Without that kind of stylistic flourish and with barely a story to speak of, "The Raid: Redemption" doesn't have anything going for it but its fights. If 100 minutes of that is what you want, go for it. You won't be let down.