Manos: The sequel of fate strikes in 2013 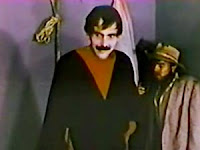 The sequel no one expected is now set to be released in 2013.

According to a post at Horror Society, Manos: The Search For Valley Lodge  will star the WWE's Gene Snitsky and Maria Kanellis, horror-movie actresses Helene Udy (the original My Bloody Valentine) and Tara Cardinal (Song of The Shattered), as well as original-film cast members Jackey Neyman (Debbie), Bernie Rosenblum (the teenage guy who really liked kissing) and Tom Neyman (The Master).

Written, produced, directed by, and starring Hal P. Warren, a fertilizer salesman from El Paso, Texas, Manos: The Hands of Fate languished in bad-movie obscurity until it was resurrected as one of the most memorable episodes of Mystery Science Theater 3000.


A woman battling mental illness regains her memory and heads into the deserts of El Paso, Texas to confront her inner demons and discover her mysterious past.

Just guessing, but the woman there is probably the original movie's Debbie, who remembers her traumatic childhood experiences in the first film:

Email ThisBlogThis!Share to TwitterShare to FacebookShare to Pinterest
Labels: manos the hands of fate, mst3k