Culture Shock 10.15.09: Want a good scare? Send in the clowns this Halloween 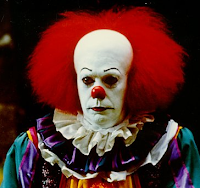 If you're still trying to come up with the perfect Halloween costume — something that will strike fear into even the hardest hearts — here is a suggestion.

Sure, clowns claim they only want to make you laugh and cheer you up. But that's a ruse to lull you into a false sense of security. Clowns are creepy, and I'm not the only person who thinks so. Just ask Batman.

While in a costume shop Saturday, I saw a young woman nearly have a panic attack at the mere thought of stumbling upon an empty clown costume. Imagine how she might have freaked out had she encountered a clown costume with someone inside it.

Look closely. You can sense the evil lurking behind those beady little clown eyes. They try to distract you with those big, red, bulbous noses. But I know better. Look into their eyes, and you'll see. Pure evil, I tell you.

Like the fear of spiders, heights and enclosed spaces, the fear of clowns has a technical name. It's called coulrophobia. If you want some real nightmares, think long and hard about being trapped in a free-falling elevator with a clown and his pet tarantula.

None of this has been lost on writers and filmmakers, who have long exploited the creepiness of clowns. There's the Joker, obviously. And in Stephen King's "It," the title character appears in many sinister guises, but It most often takes the form of Pennywise the Dancing Clown. King has dreamed up a lot of scary things, but few compare to the image of a clown-faced Tim Curry grinning from a storm drain.

Scary clowns dot the Hollywood landscape, from "Clownhouse" and the extraterrestrial clowns of "Killer Klowns from Outer Space" to "Shakes the Clown" and "Patch Adams."

I know what you're going to say. "Shakes the Clown" was a comedy vehicle for Bobcat Goldthwait, while "Patch Adams" was a shameless, if unsuccessful, attempt to snare Robin Williams an Oscar. But watch them again. These movies reek of unmitigated evil. And "Patch Adams" is by far the more insidious of the two. It's pure propaganda for the Clown Industrial Complex.

How pervasive is this clown propaganda? It's everywhere. No matter where you live, you're probably no more than a few blocks from the clowns' most successful attempt at gaining your trust.

Yes, McDonald's seems like such a happy place, with its Happy Meals and such. But what is Ronald McDonald really up to? Why is his best friend named Grimace, which means a facial expression usually of disgust, disapproval or pain? And why do his Fry Goblin pals now call themselves Fry Guys? Was "goblin" giving too much away?

Burger King knows what's really going on. That's why after many years and millions spent on research and development, the No. 2 hamburger chain finally came up with a mascot who is even more sinister than Ronald — The Burger King.

Why are the two top fast-food restaurants in an arms race to determine which one has the scariest mascot, anyway?

And while I don't want to say all clowns are serial killers, there is the example of John Wayne Gacy, aka Pogo the Clown.

Think of that when you go to bed tonight. As for me, I can't sleep. Clowns will eat me.