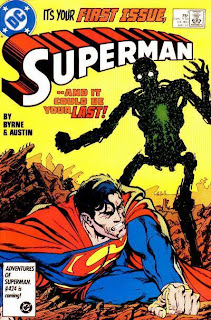 According to his public relations handlers, Superman is supposed to fight a never-ending battle for truth, justice and the American way. But the only battle Superman is fighting nowadays is in court.

The latest skirmish went public last week with the news that Warner Bros., owner of DC Comics, which, in turn, owns Superman, had lost some of its rights to the character. The heirs of Superman co-creator Jerry Siegel gained rights to key elements of the Man of Steel's mythos, including Lois Lane, Krypton, his costume design, The Daily Planet and his alter-ego, Clark Kent.

Basically, they got everything that Siegel and his partner, Joe Shuster, came up with before the two sold their Superman copyright to National Publications, the company that would eventually become DC Comics.

Putting the best possible spin on the situation, Warner Bros. issued a statement: "Warner and DC Comics are pleased that the court has affirmed that the vast majority of key elements associated with the Superman character that were developed after Action Comics No. 1 are not part of the copyrights that the plaintiffs have recaptured and therefore remain solely owned by DC Comics."

But all of that may not mean a lot as long as ownership of Superman himself is still an issue.

These legal wranglings have been going on for years — and, in some cases, decades. Siegel and Shuster sold Superman for a string of beads and soon regretted it. They spent years trying to get more money out of DC Comics, eventually having to settle for modest pensions. Unlike Bob Kane, Batman's creator of record, Superman's dads didn't have a lawyer when they sold the rights to their creation. Kane died wealthy. Siegel and Shuster did not.

The latest battle stems from a change in law allowing original copyright holders, or their heirs, to reclaim copyrights transferred before 1978. Siegel's widow and their daughter filed a copyright termination notice 10 years ago, and the fight has been raging, more or less, ever since.

As it currently stands, Warner Bros. and DC will lose their rights to Superman in their entirety in 2013, putting pressure on Warner to get a new Superman movie into development by 2011. Judge Stephen Larson ruled last month that if a new film isn't in the works by then, Siegel's heirs can sue for damages.

Warner's problems are the result of Superman still being under copyright in the first place, which, ironically, is partly Warner's fault. The copyright on Superman, who was created in 1938, should have run out years ago. But media giants like Warner and Disney have successfully lobbied Congress for repeated extensions, without which Superman, Bugs Bunny, Mickey Mouse and other characters created in the 1930s would already have lapsed into the public domain.

In Disney's case, the hypocrisy is particularly rank. The Disney empire is built on public-domain characters, from Snow White to the Little Mermaid.

In any event, Warner Bros. will eventually pay whatever it takes to make Siegel's heirs go away, leaving Superman in Warner's stable of marketable intellectual property. Then Warner and Disney will lobby for — and probably get — more copyright extensions from Congress.

And the pubic, which should own Superman by now, will remain forgotten in the legal shenanigans.