Things to do on the Internet when you’re dead

Note: The following column contains Internet language. It may be unintelligible to people over 30. Teenage translation is suggested.

I don’t have statistics to prove it, but I’m reasonably sure that the second most common use of the Internet, after looking up naked pictures of celebrities, is wasting time.
But there are more and less productive ways of wasting time while surfing the Internet. So, here are some of my favorites, in no particular order.

Lolcats. Once upon a time, there was a photo of a forlorn kitty who asked a simple, if grammatically suspect, question: “I can has cheezburger?” Did the cat ever get a cheeseburger? Who knows? It doesn’t matter. What matters is what followed. From that one photo and its semiliterate plea grew a phenomenon.

Now, the lolcats — cats who will make you “laugh out loud” — are everywhere. They’re in cars, buckets, washing machines and, yes, even in ceilings. Some are happy, others sad. They can’t quite grasp the English language. They made you a cookie, but then eated(cq) it. And most have simply had enough of you silly humans.

One Web site collects them all: icanhascheezburger.com. At last count, the site was up to more than 240 pages of pictures of cats, and a few others animals, too, in funny situations with funnier captions.

But just Google “lolcat,” and you’ll find them everywhere.

The lolcats have become so popular that the dogs have become jealous. So, now the loldogs have their own Web site, ihasahotdog.com. But it’s not as good as the lolcats’ site, because LOLCATS > LOLDOGS LOL!!!

(Author’s note: All dog lovers offended by the idea that cats are better than dogs, please e-mail your complaints to Scott Morris, managing editor and cat hater, at smorris@decaturdaily.com. K? THX.) 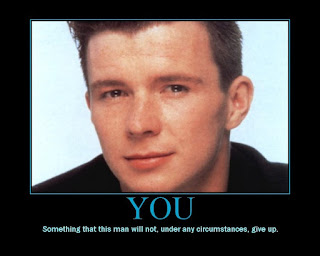 The Rickroll. There you are, minding your own business, when a friend e-mails you a link. You click it. Then, you realize your mistake, but it’s too late. You’ve been subjected to totally unexpected Rick Astley. Now you’re going to have his stupid song stuck in your head for the rest of the day. You’ve been Rickrolled.

Astley is the freckle-faced poster boy for 1980s musical mediocrity, as exemplified by his biggest hit, “Never Gonna Give You Up.” He was everything that was wrong with pop music during the decade of Ronald Reagan and “Family Ties.” He couldn’t even succeed as a one-hit wonder, because he actually had a second hit, “Together Forever.” There is some minimal amount of coolness that comes with being a one-hit wonder. But there is no such thing as a two-hit wonder. Having two hit singles before sliding into obscurity just makes you lame.

That’s what makes the Rickroll such a devious Internet prank. Well, that and the fact that Astley’s lyrics make him sound like a potentially dangerous stalker.

Last.fm. First there was Friendster. Then MySpace. Then Facebook. But there is one social networking Web site that lets you truly appreciate how terrible your friends’ taste in music is — Last.fm.

In addition to letting you listen to a lot of music online and free of charge, Last.fm can monitor the MP3s you play on your computer or iPod and match you with others who have similar musical tastes. You can also see what music your friends are listening to, and if it’s good, you can then e-mail your so-called friends and ask them why they haven’t already burned you a CD. (Editor’s note: The Decatur Daily’s staff and management do not condone music piracy.)

Of course, you’re more likely to discover that your friends, like most Last.fm users, have rotten musical tastes. And in that case, you can mock them for it. I mean, really, Coldplay? Coldplay??? I thought I knew you people.
Posted by Franklin at 12:00 AM